Improving Performance by Using Switches Instead of Hubs

Basically there are two largest performance problems encountered by hubs. These problems are resolved by the LAN switches. The process of how a hub creates an electric bus is illustrated in the diagram below. 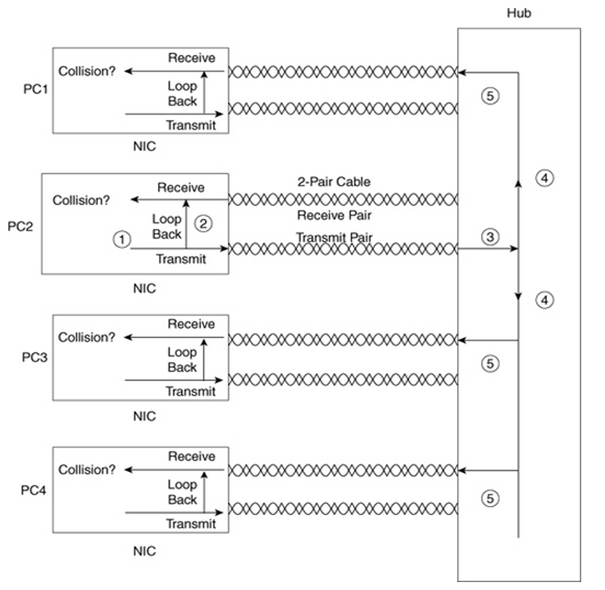 Discussing the process in steps:

Step 1: A frame is sent by the Network Interface Card (NIC).
Step 2: The frame is looped by the NIC. This is done on the card.
Step 3: The electrical signals are received by the hub. The signals are interpreted as bits in order to clean and repeat signals.
Step 4: The signal is repeated to all the ports by the internal wiring of the hub. It is not sent to the original port.
Step 5: The signal is repeated by the hub to each of the received pair on further devices. In the last step when the two systems transmit an electric signal at same point of time, collision occurs.

Collisions are prevented by the CSMA/CD logic. The logic also defines the steps to be taken in case of a collision. The steps are discussed below:

Step 1: Till the time the Ethernet is free, the process of listening by a device with a frame.
Step 2: During the time the Ethernet is free, the sender or senders start sending the frames.
Step 3: The sender or senders listen for collision.
Step 4: In case of collision, the devices responsible for sending the frames send signals for jamming. This ensures that all the stations are able to recognize collision.
Step 5: After jamming process is complete, a timer is randomized by every sender. The sender waits before attempting to resend a frame that has collided.
Step 6: On expiry of the random timers, the process restarts from the first step.

The collisions are not prevented but it is ensured that Ethernet works efficiently. But still there are performance issues. The devices have to wait till the Ethernet becomes silent. This logic of waiting before sending until the LAN is silent is termed as half duplex. During collision, useful data does not make it through the LAN. The device had to wait for a longer duration for using the LAN. As a result the load increases and the probability of collisions increase. LAN switches help in reducing or even eliminating collisions that take place on a LAN. It functions in the following manner:

The use of switch provides improved performance specifically in the following cases:

The second point is Ethernet - shared and switched.

Shared Ethernet is the sharing of LAN bandwidth amongst the devices for taking turns due to the CSMA/CD algorithm. Switched Ethernet states that there is no need of sharing the bandwidth which gives a great performance.

It is a basic requirement of Hubs that the CSMA/CD logic works efficiently. CSMA/CD imposes half duplex logic imposed on every device. Comparatively, switches buffer the frames in the memory and eliminate the collision on switch ports. The result is that, full-duplex logic is used. Full duplex logic stands for using an Ethernet card for sending and receiving at the same time.