Networking model also termed as networking blueprint is defined as a broad arrangement of documents. Each document is to define a particular function. Some define protocol while others define the physical needs for the purpose of networking. One can build his own network, prepare a software or networking cards.

As on date, the computer networking world utilizes a networking model - TCP (transmission control protocol) /IP (internet protocol). In the absence of networking protocols, the protocols so created by the vendors used to support only his computer. For example-if a company used to buy computers from 2 different vendors, two different networks had to be created.

Though the vendor-defined models worked well, ISO has aims with reference to the OSI model:

There are two alternative models for TCP/IP 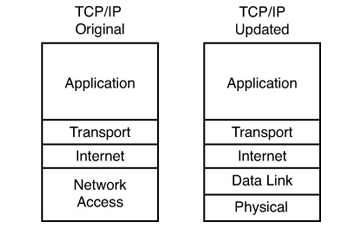 The application helps in providing services to the application software. It defines the services required by the application. Quiet famous TCP/IP application is a web browser. Some architecture layer example protocols are HTTP, POP3, SMTP. The full version of most web addresses-also called universal resource locators (URL)-begin with the letters "http," which means that HTTP is used to transfer the web pages.

Smaller number of protocols is used in the transport layer. Commonly used protocols are Transmission Control Protocol (TCP) and the User Datagram Protocol (UDP). Transport layer helps in providing services to the application layer. The adjacent-layer interaction- it refers to the working of adjacent layers together in a working model.

The same layer interaction- it refers to the communication of same layers between two computers. It is the process of setting and interpreting the information in the headers.

It provides services to the layers above it as shown in the model. It includes a large number of protocols and standards. It includes all the variations of Ethernet, several LAN standards and popular WAN standards. Network access layer divides its functions in two layers: data link and physical as embedded in the table.