IPv6 was the first major revamp of IP resulting in improvement of performance with features like NAT. The original structure has been retained. IPv6 has been available for use with Microsoft Operating Systems since the time of NT 4.0. Microsoft Vista was the operating system that enabled it by default while before this it had to be enabled manually.

Improved Concepts a part of IPv6

There were several features of IPv4 protocol that could be improved upon and IPv6 incorporated those improvements and also added new features resulting in improved performance and functionality.

The new concepts that are a part of IPv6 are:

The concepts that need to be considered in IPv6 addressing are discussed in detail below:

As already discussed the IPv6 address is of 128 bits and most of the times the hexadecimal notation is followed. . A comparison of IPv4 and IPv6 is represented in the figure given below: 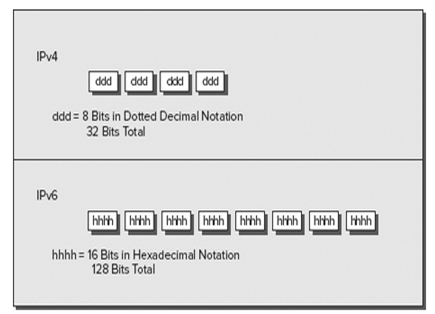 Figure 1: Comparison of IPv4 and IPv6

A number of shortcuts for writing IPv6 addresses are possible. The major shortcuts along with examples are enumerated in the table below:

In case of 32 bits of the network from the ISP, 96 bits are available to work with. In case some of the bits are being used within the network infrastructure, it is a case of subnetting. Subnetting is also relevant in the case of IPv6 but with large number of bits available, implementation of VLSM is no longer required. The ipconfig command can be used for seeing the configured address.