TCP/IP is a combination of two sets of protocols, namely TCP and IP. These protocols are based on a four layer TCP/IP model as illustrated in the figure below 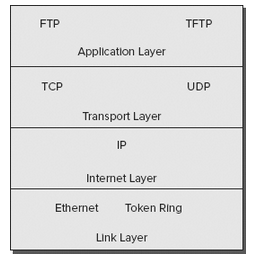 The article discusses the TCP/IP Model in detail.

The four layers of the TCP/IP are -

In case an application like an FTP application is called, the application travels down through the layers and retrieval of TCP takes place. TCP then sets up a connection with IP protocol and enters the network through the Link Layer. This being a connection oriented protocol, delivery of the message is guaranteed. 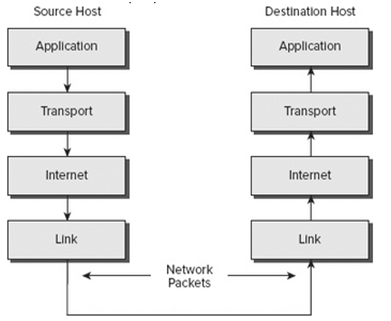 TCP and UDP are dependent on port numbers that have been assigned by IANA - Internet Assigned Numbers Authority for forwarding packets to the proper application process. Port numbers are 16 bit integers that form a portion of the message header.

The application software process with which the packet is to be associated is identified by them. The most commonly used port numbers are listed in the table below. The full list is available at www.iana.org. It is important for an administrator to know the important port numbers that block or allow specific protocols.

The above table shows few common and popular port numbers so that they can be memorized for ease.