It is important to choose the right kind of network before it can actually be set up. It is a crucial decision for the success of a network. The choice of network determines how the computers and the servers are placed on the network. The article discusses in detail two network models that are used by Microsoft Windows.

In a Microsoft Windows peer to peer network also known as a workgroup, all systems that are on a network are at the same level and are considered as equal. All computers perform both the roles of a client and a server. This type of network is suited for smaller networks with not more than 12 users.

There are some enhancements that are a part of Windows Vista and Windows 7 for Windows peer-to-peer network. Discussing the enhancements briefly: 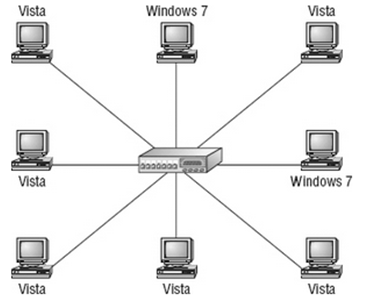 There are some shortcomings of a peer to peer network. The entire data is stored on individual workstations and the security is controlled by the owner of the workstation. Every user wanting to log onto a machine must have a local username and password. The fact the network is limited to a maximum of 12 computers is another disadvantage. In addition to these the backups have to be done locally and the security is decentralized.