A network is subject to interference of different types posing a challenge while deploying a network. It is only knowledge about the different tools that can help one deal with these challenges. The first and the most important step is to determine the strength of the signal, the noise levels and the sources of interference. The article discusses the various tools that can be employed for dealing with interference.

To determine the signal strength, noise levels and potential sources of obstacles in the path, there is a need to know the availability of tools. The tools that are available are Fresnel Zone, Receiver Signal Strength Indicator, Signal to Noise Ratio and Link Budget.

The Fresnel zone is named after Augustin Jean Fresnel a French civil engineer and physicist. He assumed that light moved in a wavelike motion transverse to the direction of propagation. His claims were accepted as correct. The method for determining where reflections will be in phase and out of phase between sender and recipient is called Fresnel Zone.

The path was been divided into zones by Fresnel. According to him, the first zone should be 60% clear of any obstructions. Fresnel gave a formula that allows determination of the width of a wave in order to ensure that it is free from obstructions. Indoor signals are not affected for they cover short distances. 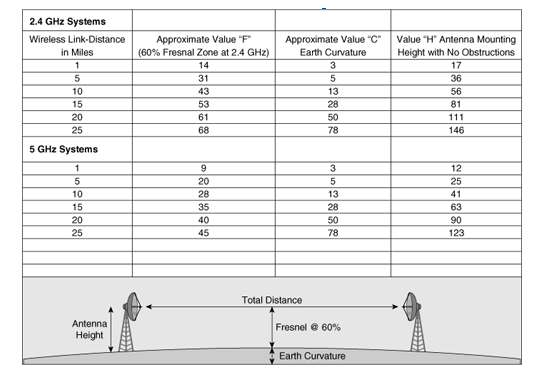 It is a measurement which helps in determining the strength of a signal received by a station. It uses vendor specified values. As it is vendor specific, it cannot be relied upon. Still, it is a useful parameter which is used to measure the quantum of signal received. Being vendor specific, the scale used can also vary. As the scales are being used by the different vendors, they may have different ranges. So, the two scales will it is still considered as the best indicator. It is used while conducting site surveys and other tests. Network Stumbler is used to as a tool to give RSSI values.

It is acquired during the preamble stage. The process of replacing RSSI with Receive Channel Power Indicator (RCPI) is on. RCPI is a functional measurement of the complete received frame with specific degree of parameters like resolution and accuracy.

Signal-to-noise ratio (SNR) is a term that is used for describing the strength of a signal in comparison to the surrounding noise which has the effect of corrupting the same. In case of a situation where the outside influences are causing too much noise, the effect is that the receivers cannot understand the transmissions.

When the software running the wireless card issues a report of the measurement, higher the number the better are the results. As this is also built on the RSSI value so this is also vendor specific. While conducting site surveys it is important to remember that higher data rates need higher RSSI and SNR values as compared to the lower data rates.

This value is used to record the gain of signal strength or its loss in context of sender and recipient. It is useful in determining the power required in transmitting a signal which can be understood by the receiving end.