How Bandwidth is achieved from RF Signals

The article discusses in detail how bandwidth can be achieved from RF signals.

The IEEE has developed 802.11 standards that define half duplex operations in which a common frequency is used for both way operations on a Wireless LAN. If RF signals are to be achieved from bandwidth, emission method is to be used to send data as electrical signals. This type of emission method is known as Spread Spectrum. It was used in commercial market in 1986 when FCC allowed. A modulation technique is required if the data is to be placed in the RF signals. FCC not only defines the frequencies for unlicensed use but also sets the specifications pertaining to power levels at which WLAN devices can function, the technologies to be used for transmission and the location of the WLAN devices.

As the amount of information placed increases so does the frequency, spectrum and the bandwidth. For purposes of this article the term bandwidth refers to the width of the RF channel and not data rates. There are two types of Modulations:

As the amount of information on a signal will increase, so will the frequency spectrum or the bandwidth. Bandwidth can be defined in two ways. It can be defined as data rates or width of an RF channel. We consider it as width of an RF channel. We use the standard unit as Hertz (Hz) for measuring bandwidth. One hertz is equivalent to one cycle per second. Fm radio is considered as a high quality as compared to CB radio because FM radio uses 175 kHz of bandwidth as compared to CB which uses only 3 kHz. Television signal uses 4500 kHz of bandwidth. 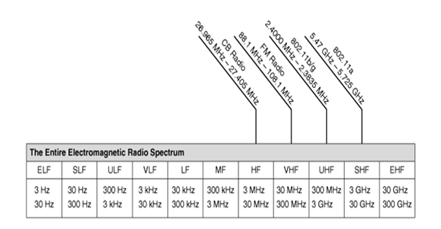 
Usable Frequency Bands in Europe, the United States, and Japan

We can clearly see that in Europe, the 2.4-GHz range and the 5.0-GHz range are used. The 5.0-GHz frequency ranges that are used in Europe are called the Conference of European Post and Telecommunication (CEPT) A, CEPT B, and CEPT C bands. In the United States, the 900-MHz, 2.4-GHz ISM, and 5.0-GHz unlicensed national information infrastructure (UNII) bands are used. Japan has its own ranges in the 2.4- and 5.0-GHz range.