In Windows Server 2008 and Windows Server 2008 R2, the standard command line tools like ping, pathping, ipconfig, tracert, netsat and route have complete IPv6 functionality. The following figure demonstrates the ping command used to check connectivity with a local IPv6 in the testing network environment. The IPv6 addresses differ on the test network. When a ping comes from one host to another, the command has to include the interface ID. 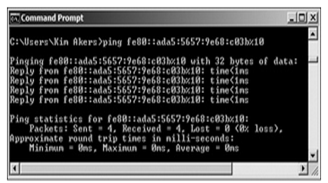 
Tools that are particular to IPv6 are available in the netsh ((network shell) command structure.

While troubleshooting connectivity problems or while wanting to check configuration the most important tool is ipconfig. The command displays configuration for both IPv4 and IPv6. If configuration of only IPv6 has to be displayed, the netsh interface ipv6 show address command can be used. The output of the command that is run on a VAN-DC1 is represented in the figure below. 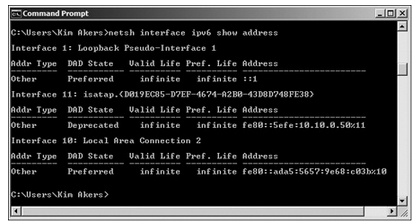 If an enterprise network with multiple sites is being administered, the site IDs or the Scope IDs is a requirement. To obtain a site ID, the administrator should use command netsh interface ipv6 show address level=verbose.

The benefit of using the TCP/IPv6 GUI is that the IPv6 address of one or more DNS servers can be specified. This can be done in addition to the interface address. The Command Line Interface (CLI) command that can be used for configuration are given in the table below:

For verifying connectivity available on a local network, the first step is to clear the neighbor cache that stores a link layer address that has been recently resolved. True results may not be achieved while checking the changes involving address resolution. The commands that can be used are:


By using the ping command connectivity to a local host on the subnet and to the default gateway can be tested. To ensure that the address is configured on the right interface, the ID of this interface can be added to the IPv6 interface address.

For checking a remote network for connectivity to a host, the first task is reviewing and clearing the cache reflecting the IPv6 addresses for destinations. The various commands that can be used for various purposes are:

An administrator is well aware of the fact that if connection cannot be made to a remote host, the first thing to do is to check various hardware connections in order to ensure that all devices are connected and running. In case this check does nothing to identify the problem, the Internet Protocol Security (IPsec) configuration might not be properly configured or there may be firewall problems.

To check and configure IP security policies and the Windows Firewall settings, the IP Security Policies Management MMC (Microsoft Management Console) is used. This tool allows for convenient review and configuration of IPv6 based packet filters.

The tool is not implemented in Windows Server 2008 or Windows Server 2008 R2. Reaching out to remote or local destinations due to missing routes or incorrect routes outlined in the local IPv6 routing table. Commands like netstat -r, route print, or netsh interface ipv6 show route command for viewing the local IPv6 routing table as well as verification of a route that corresponds to a subnet that is local and to the default gateway.

If many default routes are available within the same metric, IPv6 router configurations may need to be modified. This is done in order to ensure that a default route with the lowest metric is used by the interface connecting the network and the highest number of subnets. The various commands that can be used for various purposes are:

In case of installation of telnet client tool, a verification can be made if the TCP connection to a TCP port has been established. This can be done by entering the command, as well as the destination IPv6 address and the number of the TCP port used in the process.