The XML format is used by a Windows Server 2008 R2 answer file. An administrator creates this file by using a Windows System Image Manager (Windows SIM) tool. The SIM tool is a part of the Windows Automated Installation Kit (Windows AIK or WAIK). This can be obtained from the Microsoft Download Center or can be downloaded using the Microsoft Deployment Toolkit (MDT) Deployment Workbench. A text editor can also be used for creating an answer file. The benefits of using the XML syntax are:

The following steps have to be followed in order to create an answer using the Windows SIM: 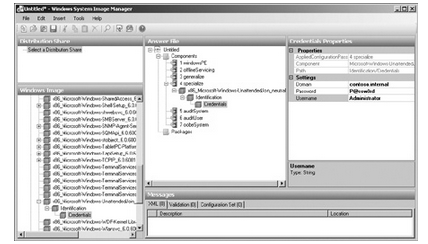 In traditional unattended installations floppy disks that contain unattended text files. Since the modern systems do not have floppy drives, the Windows Server 2008 R2 setup routine performs a check on all the local volumes of the server automatically for a file identified by the name Autounattended.xml. The check is also performed on removable disk drives that are attached to a computer.