We are already aware that an IPv4 address is of 32 bits length and partitioned into 4 octets of 8 bits each. The decimal format with dots is usually adopted for representing an IPv4 address. A subnet mask is a 32 bit number that comprises of a number of one's arranged in a series and followed by a number of zero's which are again arranged in a series. A slash followed the number of one's in the mask can also be used for representing the subnet mask.

IP addresses consist of two parts, where one part depicts the host while the other part represents the network on which that host is placed. A subnet mask performs the task of defining the bits forming an IP address that is used for identifying the host and the network. To explain it with the help of an example, in 192.168.56.0 /24, the /24 is for the subnet mask. It points out that 24 out of 32 bits in address depict ID - the identity of the network. A lower value after slash indicates that a greater number of host addresses is that can be accommodated on that subnet.

If a system that is hosted on a subnet transmits an IPv4 datagram to another system which is hosted on another network, the first thing that the datagram does is to go to the default gateway address that is existing on the subnet. Let us look at two important processes -

Subnet masks can be configured resulting in a subnet mask to be used externally while the others are used internally allowing a more efficient use of network address space. A typical process is where after subnetting a network, a subnet is further drawn into subnets. As the level keeps going down the number of hosts keeps decreasing.

Layer 3 devices control the process of routing. These are configured in a manner that allows using the longest match algorithm for routing the datagram to the proper subnet.

An alternative method that can be used for IPv4 Configuration is by using netsh commands or by using the TCP/IPv4 Properties graphical user interface (GUI). The alternate method is briefly discussed below.

The IP address, a subnet mask and a default gateway can be specified right on the General tab of Internet Protocol Version 4 (TCP/IPv4) Properties dialog box. Another option is to configure the interface allowing it to obtain the settings on its own. The option of obtaining the static IPv4 address for a DNS server on its own is also available. If a static interface address is configured, a static DNS server address also needs to be specified. For automatic configuration, the DHCP is used and in case no DHCP leases are available, alternate configurations are applied. 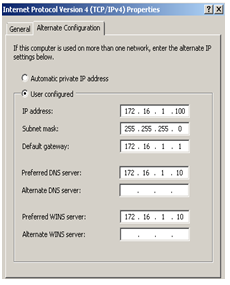