3 VPN protocols are supported by Windows Server 2008: SSTP, L2TP, and PPTP. Discussing the protocols in detail:

When Windows Server 2008 is configured as a VPN server, connections can be made by using all three protocols. Separate network policies for different connection settings can be configured. The settings are dependent on the protocol that is being used. For disabling a specific protocol, the first step is to clear the check boxes for Remote Access Connections (Inbound Only) and Demand-Dial Routing Connections (Inbound And Outbound). The same is depicted in the diagram given below. 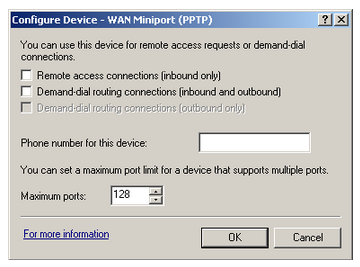 Disabling PPTP on a VPN server