Static routing table configuration proves efficient in case of limited routers and network configuration that is not subject to frequent changes. For networks that are large (with 15 or more routers) or networks where configuration is susceptible to changes 9example dynamic corporate networks) it is recommended that a routing protocol be used.

The Microsoft software-based routing solution is not best suited for networks that are large and complex in nature. Windows Server 2008 supports Routing Information Protocol (RIP). RIP is designed in a manner that allows exchange of routing related information. The size of the network should ideally be small or medium.

Configuration and deployment of RIP is a simple process. A major drawback with RIP is its unscalability to large networks. The maximum hop count that RIP routers can support is 15. In the case of large networks the announcements generated by the RIP counter seem like excessive traffic.

When compared to routing protocols that are considered sophisticated, RIP has a higher recovery time. As the topology of the network changes, it may take time before the RIP routers reconfigure. As the network reconfigures, routing loops may be formed resulting data getting lost or being treated as undeliverable. Inspite of all this, RIP still results in a lesser amount of delay and traffic that has been lost than in the case of manual reconfiguration. 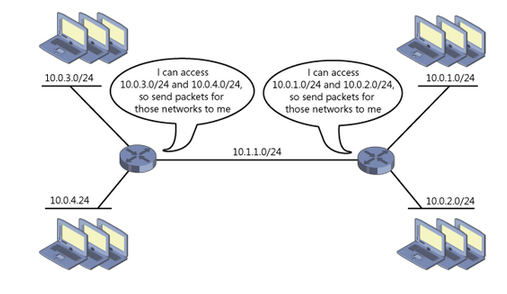 RIP implementation in Windows Server 2008 environment has the following characteristics: